Lunar New Year: What The Year Of The Tiger Can Do For You

It’s time to say farewell to winter’s frost and usher in a season of rebirth and renewal and welcome Lunar New Year celebrations 1 Feb 2022. It’s the most important occasion in the Chinese calendar and is celebrated in many East and Southeast Asian countries. While it’s not known exactly when the festival originated, the event has been marked in China as early as the Shang Dynasty in the 14th century B.C.

So 新年快樂, Xīnnián kuàilè (in Pinyin) and ㄒㄧㄣ  ㄋㄧㄢˊ  ㄎㄨㄞˋ  ㄌㄜˋ (in Zhuyin), which directly translates to New Year Happy! Another common greeting at this time of year is gong xi fa cai (in Mandarin Chinese) or gong hei fat choy (in Cantonese Chinese) which means ‘I wish you prosperity,’ willing riches and affluence to all you say it to.

What Lunar New Year is all about

With festivities lasting up to 16 days, Lunar New Year is a grand celebration, with preparations beginning about a week before the big day. On day 26 of the last lunar month – in 2022, this fell on January 28 – cakes are baked, and tucking into them is believed to bring prosperity for the upcoming year. Homes are cleaned and spruced, aiming to strip your house of any bad luck that has accumulated over the last year and might still be lurking.

Family is at the heart of the festival and a sumptuous feast is held on Lunar New Year’s Eve, bringing family together from far and wide. The menu is bursting with dishes associated with luck or even resembling riches themselves. Chinese-style dumplings look much like gold pieces or ingots used as money in the past, a sign that affluence is on the horizon for the new year. After the meal, some family members will stay up late, or even through the night, putting the bed the events of the past year and welcoming in the new – this is called shou sui.

It’s a time to be reunited with family members, and as the new year kicks off, people visit their loved ones – with one notable exception, the third day of the month, when it’s believed that tension is more likely to arise. There are many traditions and superstitions associated with this time of year. For example, people are discouraged from washing or cutting their hair on the first day of the Lunar New Year. This is because the Chinese character for hair is the first character in the word for prosper – and of course, it would be foolish to wash or cut away any upcoming prosperity.

Red clothing is worn in abundance, and houses are adorned with rich red decorations as the colour is associated with good luck, success, and happiness. Red envelopes (called hóngbāo in Mandarin and lai see in Cantonese) are filled with money and given to children. After midnight, fireworks and firecrackers are set off and the sky is filled with glorious and colourful displays while the loud bangs scare away evil spirits.

Is the Lunar New Year the same as the Chinese New Year?

Many countries in the East have adopted the Gregorian calendar, but many traditional festivals and holidays, such as New Year, remain based on the lunar calendar. Celebrations differ worldwide and include Seollal in Korea, where sliced rice cake soup is made, and Tết in Vietnam, where flowers play a vital role in the proceedings. Lunar New Year is also often referred to as Spring Festival.

When is Lunar New Year?

Lunar New Year celebrations begin when the second new moon after Winter Solstice rises, and this falls between late January and mid-February every year. In 2022, Lunar New Year was on 1st February, with celebrations set to last for two weeks and end with the Yuan Xiao Festival or Lantern Festival (February 15th this year), where thousands of paper lanterns are released into the sky.

How can you participate in Lunar New Year?

Many events take place across the UK to celebrate Lunar New Year, including parties, cooking classes, exhibitions and more. But also, welcome the Lunar New Year into your own home by decorating with red lanterns and paper decorations or a tiger or two.

Why not host your own reunion dinner and bring your family together to share lucky dishes of fish, dumplings, spring rolls and oranges? And be sure to share gifts with your loved ones. Take time for you and your family’s wellbeing and celebrate the majestic nature of the tiger with gifts – Clarins’ Limited Edition Double Serum – created especially for this Lunar New Year, or tiger print beauty accessories or pyjamas. 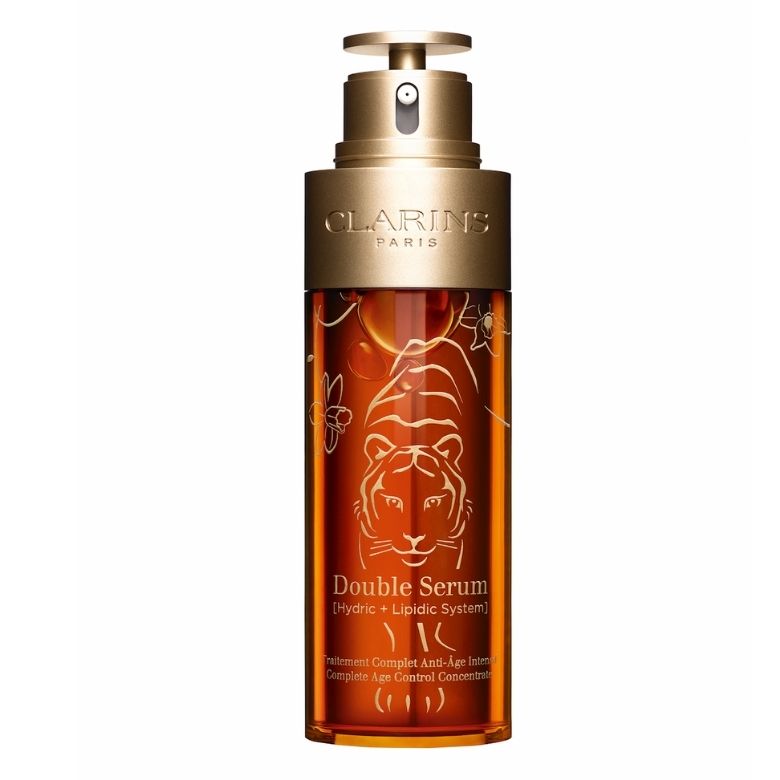 The Lantern Festival falls on 15 February this year and there have been events taking place up and down the country to mark the occasion.

Try delicious rice balls (Tangyuan) the traditional food of the festival and try to solve the riddles you will often find written onto the lanterns themselves. And importantly, let go of the events of the previous 12 months and enter a state of peaceful reconciliation for the new year.

What does it mean to be the year of the tiger?

Every Lunar New Year signals a time for new beginnings and each year in the lunar cycle is associated with an animal: 2022 is the Year of the Tiger. Legend has it that all animals in the Kingdom were challenged to a race by the Jade Emperor – with the winner certain to win much coveted favour in his eyes. Being a strong and powerful beast, the tiger felt confident of his first-place spot but was outwitted by the cunning Rat who jumped onto the mighty Ox so he could leap over the finish line first, pipping both Ox and Tiger to the first-place post.

The year you were born links you to one of the 12 animals who took part in the famous race, and you are said to inherit the characteristics and traits of your animal. Features shared include an ambitious nature and lots of courage, enthusiasm in abundance and a passion for adventure.

Tigers are kind and generous creatures but can be short-tempered and unpredictable. They do not fare well with authority, preferring to choose their path in life than be dictated instructions. So, in 2022, the Tiger’s Year, harness this boldness, but they should remember to keep their egos in check. Embrace the fresh start a new year brings and celebrate the majestic Year of the Tiger.

Tiger-inspired buys for you to give or receive this LNY

What to Get Your Boyfriend's Dad for Father’s Day

SPF Benefits: Everything You Need To Know About Suncare

The Best Ski Skincare: How To Stay Beautiful On The Slopes

Curtain Bangs Are the Biggest Hair Trend for Summer

How To Expertly Care For Blemish-Prone Skin

The 5 Active Ingredients That You Need in Your Winter Skincare

The Face & Body Beauty Tools To Invest In For Smooth Skin

Here’s What Happens To Your Skin When You Do Veganuary